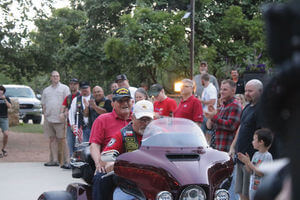 It was a night to remember for one World War II veteran on Friday.

Jim Ulbrich celebrated his 90th birthday at the SS American Memorial, which was organized by his son-in-law, Craig Russell.

“He founded the place here in 1970,” Russell said. “He taught here in Seguin, he and his wife both. He’s a retired school teacher, she was a librarian. Most of these people here know him or were taught by him.”

The veteran, who turned 90 on April 7, said the turnout was a real honor.

“It’s a big surprise. I’m not used to this many people,” he said. “It’s usually a good crowd, but not like this. So it’s a real surprise, a real treat.”

Ulbrich said he volunteered near the end of the war when he was 17 years old.

“I was in boot camp when the Germans quit, and I’d been in six months when they dropped the atomic bomb,” he said. “I was on the base. All the personnel on the base were what we called carrier aircraft service units.”

Ulbrich said he continued to serve at a base in central California before being honorably discharged.

During the 70s and 80s, Ulbrich worked to build what Russell called the only “living” memorial in the country.

“All memorials to date, people just come pay their respects and leave,” he said. “This memorial is constant. People are here all the time enjoying it and seeing the sacrifice that is in front of them all the time … We saw our culture declining in the ignorance of the history of our country. The inspiration for the memorial was based on the wounded warriors. We built it as a place for them to get out of the heat, originally. As time went on, we turned it into a memorial and decided to make it an educational place that depicts American history.”

Much of the memorial is built with adobe, which Ulbrich knew about from his time stationed at a base in Arizona.

“They had adobe houses there, and I got interested in adobe,” he said. “I was reading a mechanics magazine or something like that, and I saw in there that they were having a workshop on how to build abode. I went to that class and learned how to build adobe.”

Jerry Salyers, a member of the Combat Veterans Motorcycle Association, was among many to attend the birthday celebration.

Russell said honoring Ulbrich was especially important because he is one of the few remaining members of what Russell calls the “greatest generation.”